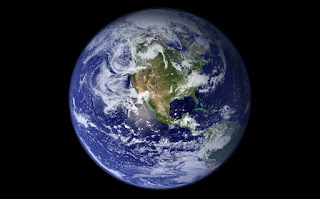 I’m surprised to learn that the very first Earth Day was held in 1970, and gave rise to the creation of the U.S. Environmental Protection Agency. Though I was still living in the States at that time, I regret to say that I have no recollection of the event. Rachel Carson’s book Silent Spring, published in 1962 was the beginning of a growing awareness and appreciation for the environment among Americans. In 2020 Earth Day will celebrate its 50th year. Fifty years. So little progress. A U.S. president denies climate change and rolls back environmental protections installed by the previous administration. I despair.
Last night my husband and I watched on Netflix the third chapter of “Our Planet”, a 2019 National Geographic Series narrated by David Attenborough. Each episode features a particular ecosystem. The jungle was the focus of the third chapter. As in the first two episodes, the spectacular, startling photography had us captivated. Yet, Richard Attenborough’s message was extremely disturbing. With statistics (did you know that the world’s population has doubled since man landed on the moon?) and graphic examples he explained how, through human depredation and climate change, we are fast losing and devastating the earth’s natural world.
This week and last, thousands of marchers have congregated in major thoroughfares of London blocking traffic demanding governmental action on climate change. Over a thousand have been arrested. I want to join the London marchers. I’d be willing to face arrest.
Chile will host the COP24 UN conference on climate change in December. The country, proud to have been chosen, is making plans and organizing meetings. This also puts pressure on the government to do more on the local level. Right now, officials are dealing with organizing streets teeming with cars to handle the explosion of bicycles and scooters. My son, working in sustainability management, informed me that Chile is only second behind China in number of electric buses. A glimmer of hope.
Don’t miss “Our Planet” on Netflix. Extremely important. Spread the word!

Posted by Tarweedspirit at 7:00 PM No comments: Links to this post

I just turned the page on my Molly Hashimoto bird calendar. Goodbye to March and your regal long-billed dowitcher and hello April with your multi-colored cedar waxwing. 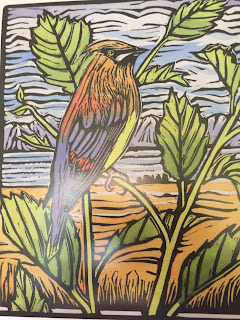 Another month, 31 days gone forever. At the end of the year we take stock, but what about at a month’s end? Or a week’s?
I’ll start with the past week, less taxing on my shaky memory. I have my handy paper (non-digital) datebook as my memory-aide. The brightest spark in my week was the launch of my book, “Notes from the Bottom of the World”, for English-speaking family and friends here in Chile. Many commented afterwards how relaxed and natural I appeared. That was probably due to my experience last November in California presenting my book to a variety of audiences. The highlight of the evening was seeing my 14-year-old twin granddaughters in the audience. I hadn’t thought they’d come due to their busy schedules and multiple interests. But their mom made a special trip to pick them up at school and drive them across town in heavy traffic to hear their author-granny. The only downside of the evening was a whopper of a cold that hit me that morning. Perfect timing. 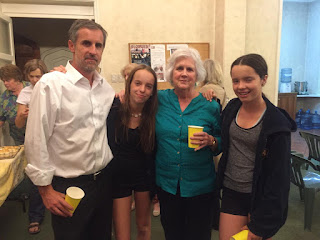 This week I witnessed the arrival of our hummingbirds, another sign of summer’s end. For some reason, they take off to other landscapes for the summer. I prepared the syrup and hung out the feeder which they found immediately.
Speedy Gonzalez, out pet tortoise, was giving signs of wanting to hibernate; eating and wandering less, so I put him in his cardboard box in the shed to sleep through the next 6 months. He inner senses signaled it was time. And he was right. Yesterday, we had our first rain, a wimpy rain, but rain all the same.
In March we finally had the outside of the house painted (after way too many years) and I love how it looks! Clean, bright, fresh. We had a setback when, Nelson, the painter we hired, quit after a week! He didn’t like that my husband pointed out a couple of things to be corrected. Actually, I think he quit because he realized the job was too difficult for him at his age. In no time, a friend gave me the name of a younger painter, Guillermo, who did a great job and was pleasant besides.
There was dinner with friends visiting from the States; a drive out to the country for lunch at favorite restaurant under its grape arbor with two friends; book club where we discussed Tara Westover’s “Educated.”  Weekly meetings with Santiago Writers. Pilates classes and gym workouts filled my days. During free moments, I sat in our garden to enjoy our mellow fall days and read.
I’m in a Scottish frame of mind. I’m researching my Scottish ancestors and late twentieth century Scotland in preparation for writing a historical novel based on my great-aunt’s unusual life. Reading “A Scot’s Quair” by Lewis Grassic Gibbon and dealing with the dialect has been a thorny challenge but I’ve now got the hang of it. Soon I’ll be speaking like a Scot.

Now I look forward to what April may bring.

Posted by Tarweedspirit at 5:01 PM No comments: Links to this post

A native Californian, graduate of UC Berkeley, former Peace Corps volunteer, I moved to Santiago,Chile in 1972 to marry my Chilean boyfriend. Two sons and four grandchildren later, I'm a retired teacher and now spend my hours writing, tree hugging, bird watching, talking to stray dogs, fighting an endless battle with garden weeds and noticing little things in life and the Earth that fill me with wonder.