Earth, Wind and Fire (and Rain)

The peaceful, benevolent skies we encountered ten days ago in the wide open Patagonian pampa of grazing sheep and guanacos turned dark and turbulent this past week, releasing a two-day torrential deluge, isolating ranchers,  engorging rivers and washing away hundreds of sheep. Having recently explored that landscape heightens the distress.
Though we know that this is a land of extremes, it continues to shock and surprise. Last month, the news carried scenes of massive mudslides in the northern desert region and raging fires in southern forests. This week, without any warning, the Calbuco volcano, inactive for forty-five years, spewed columns of red hot lava and gigantic, lightning-pierced clouds of ash and stone skyward. The ash and gravel settled in thick layers on nearby villages, farms, roads and fields. Locals were evacuated until it was deemed safe to return their homes. We city dwellers watch in shock televised scenes of horses searching in vain for food under the rubble and people shoveling gravel off their roofs to prevent their collapse before the announced rains. Beehives are being trucked to uncontaminated countryside.
Weathermen check the direction of the winds which carried ash again into Argentina. Plane flights were cancelled. All this just a few weeks after Villarrica Volcano erupted. News anchors interview volcanologists and geologists to cultivate public understanding of these processes and dispel incorrect theories. (The volcanoes are all connected underground. Wrong. Old wives’ tales die hard. Many here swear that unusual weather signals the advent of an earthquake. Easy to understand the origins of this belief as the Chilean earth is continuously trembling somewhere up and down this long, thin country.)
The political ground is shaking as well. Scandals and corruption unveiled on both ends of the political spectrum undermine public confidence. Whatsapp buzzes with jokes and cartoons. A familiar story – illegal sources of campaign money at election time.
Ho-hum.
I feel the earth move under my feet,


I feel the sky tumbling down…

Posted by Tarweedspirit at 5:53 PM No comments:

Magellan Straits:
Is there anything as white as a seagull’s breast?
The Brookes Glacier creaks and growls as it shifts on its granite perch. Turquoise columns break off the glacier and thunder into the bay. Again and again. I watch in absolute wonder.
Our zodiac speeds past sculptures floating on the water’s steely surface.
I hear the mountain ridges proclaiming: We are. Impenetrable. Immovable. You are just passing through.
I learn the names of the hardy, local vegetation, adapted to this rugged climate: wild strawberry groundcover, berry bushes, mosses and gnarled beech trees of the Nothofagus family.

Beagle Channel and Darwin Cordillera:
Young, sleek seals frolic in successive arched leaps as if imitating dolphins.
The total whiteness of the Darwin Cordillera overwhelms. It is home to over six hundred glaciers.
A full, yellowy moon glimmers in our wake as we navigate through the last of Glacier Alley. 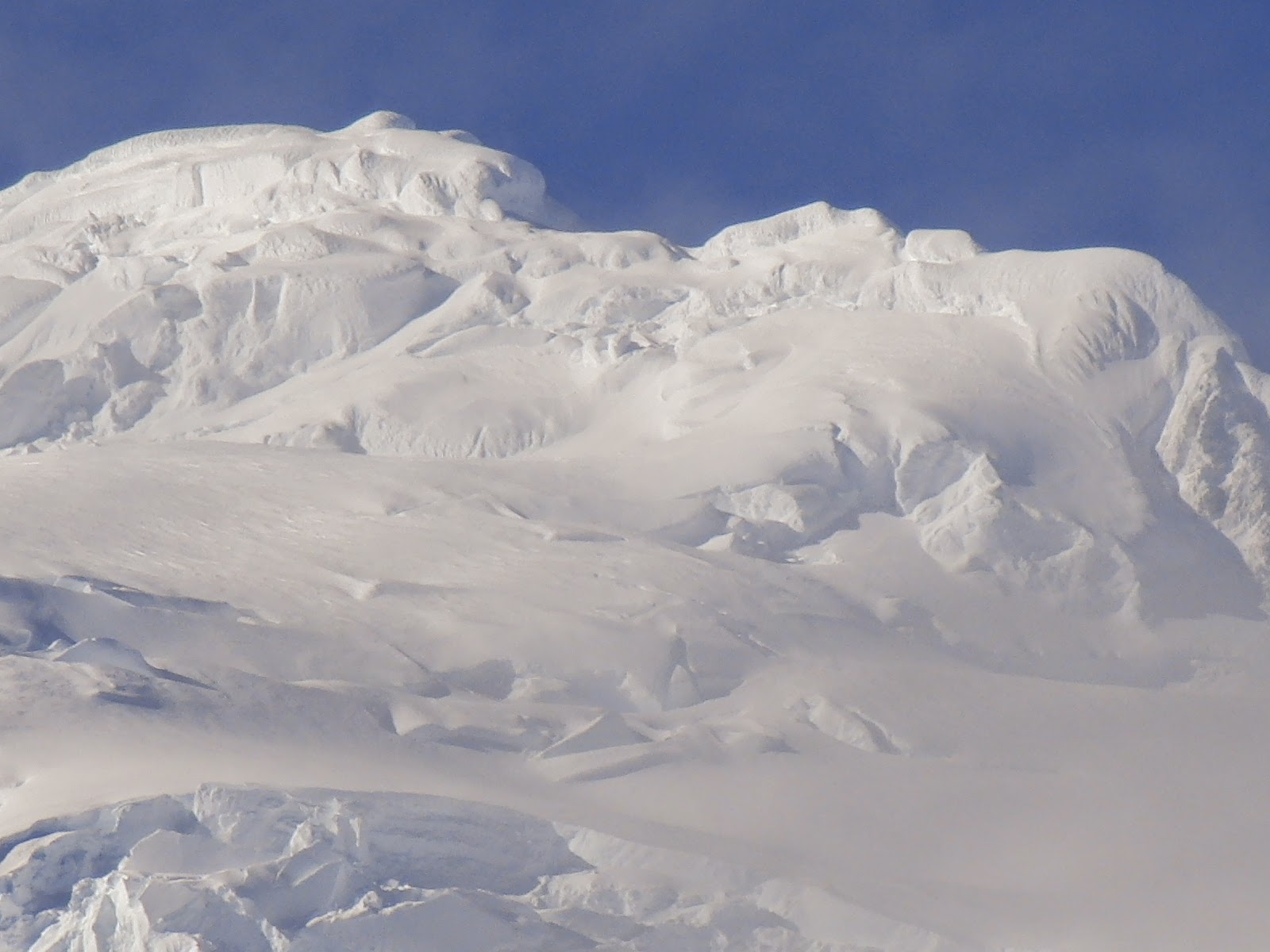 Cape Horn Island:
One hundred and sixty steps to climb to the plateau, a palette of yellow, ochre, beige and green vegetation: tall grasses, robust shrubs, moist mosses.
On this mild morning, it’s difficult to imagine the force of the wind that ripped in two the steel albatross monument dedicated to shipwrecked sailors.
An albatross parallels our ship, its long, outstretched wings narrow and regal. 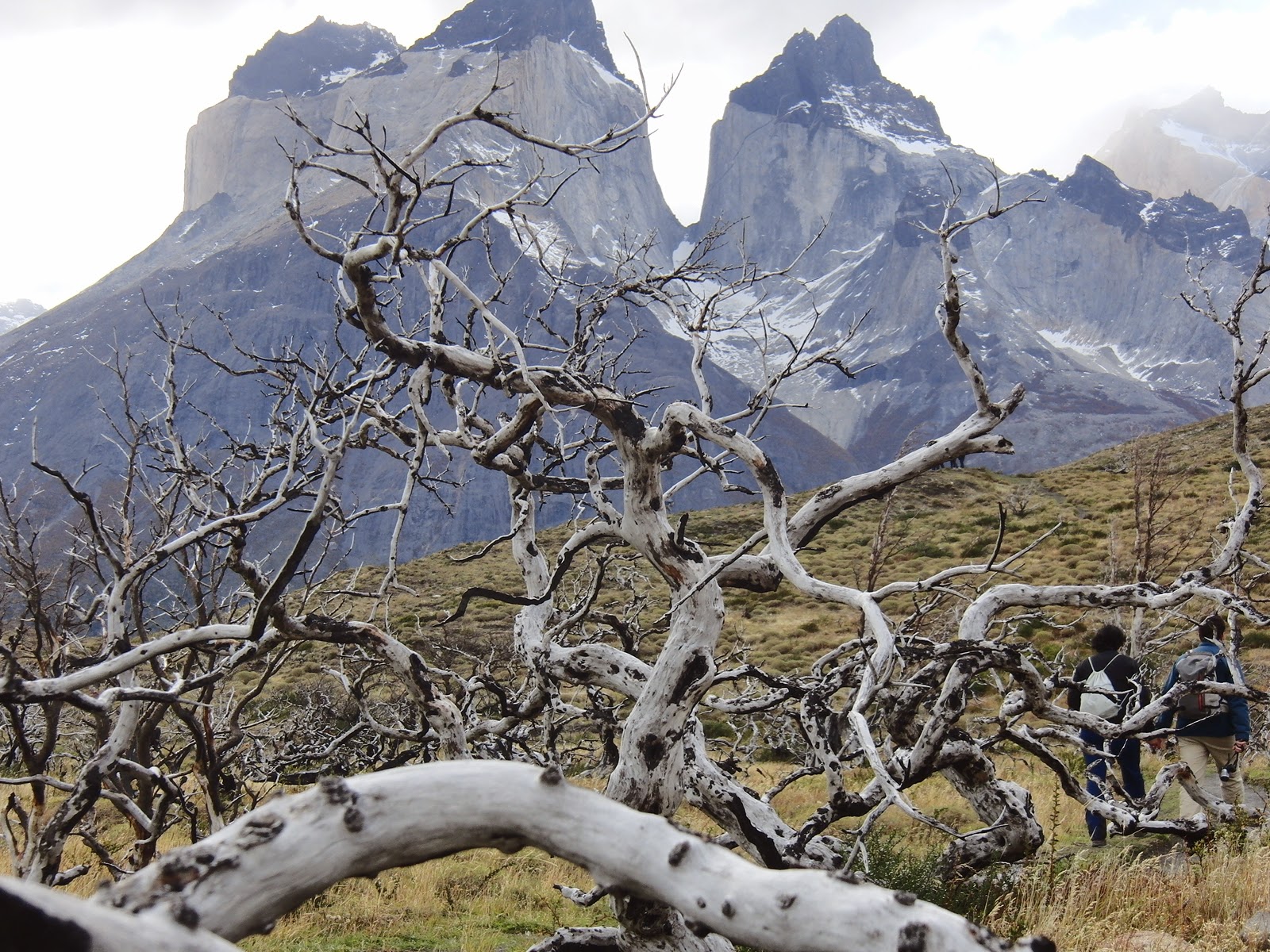 Climbing to the Condor Lookout, I breathe in the fragrances of the vegetation enhanced by last night’s rain.

Estancia Tercera Barranca sheep ranch (east of the Park):
We joggle and bounce along the dirt road winding through the wide expanses of pampa – tufts of beige grass and prickly tough black shrubs.
Sheep graze behind fences that pose no obstacle to the long-legged guanacos. Rocky bluffs rise in the distance.
The lights of the Estancia (sheep ranch). Nancy shows us our room, puts more logs on the fire in the living room and explains that the generator is turned off at eleven p.m. After that, no lights and no heat. It is a chilly night.
A stone path leads to the separate kitchen/dining area, warm and fragrant, where Carmen in a white chef’s hat serves us a savory salmon dinner with homegrown vegetables. Nancy and Carmen pamper us, the only two guests, and tell us their stories. 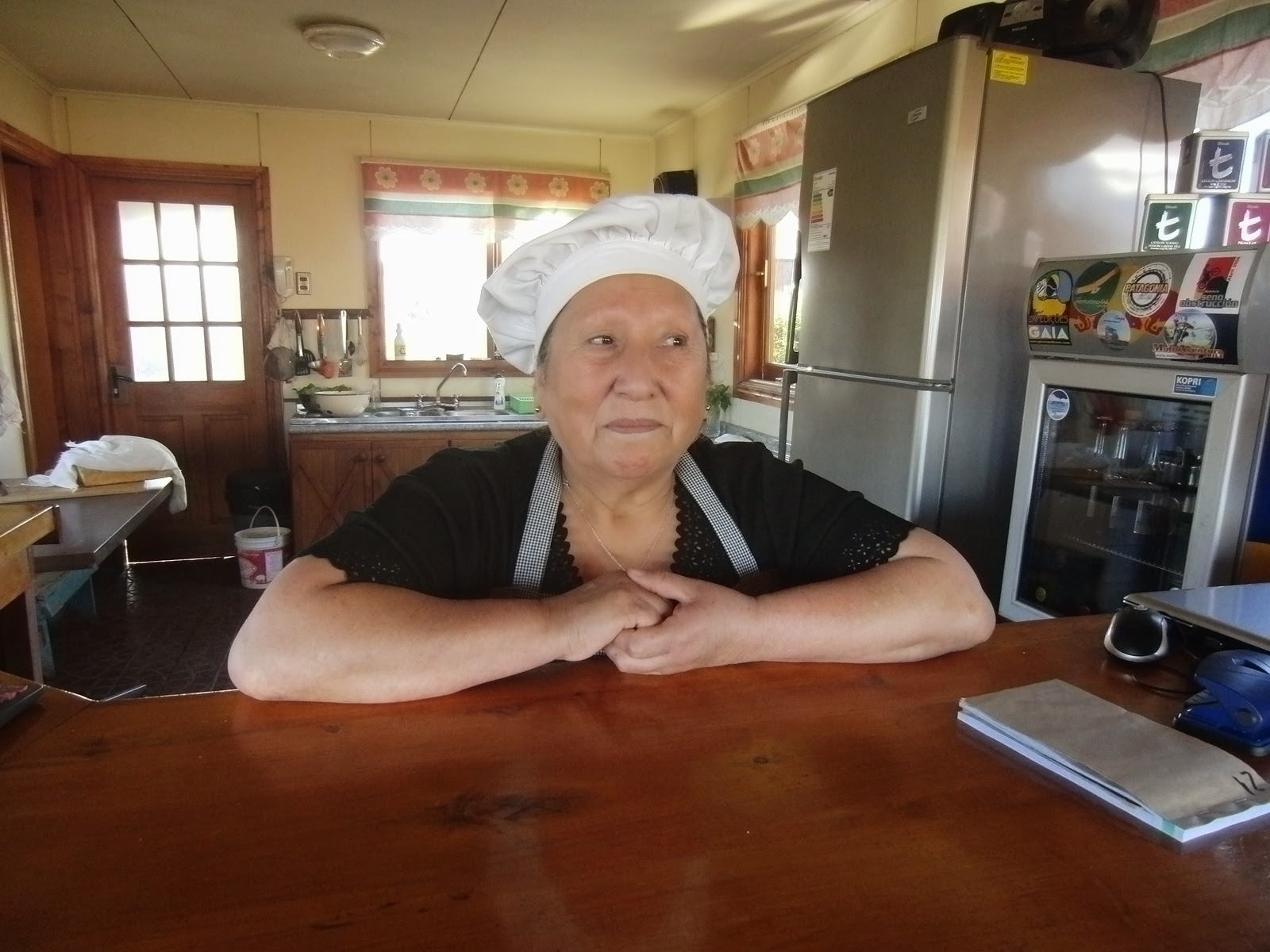 I've come to see the sheep and the gauchos, I tell them.
Oh, the sheep have been taken to another Estancia to be “bathed”, they explain, to be disinfected for ticks. Seeing my disappointment, they assure me the sheep will come back the day we leave.
The next day we pick our way through the prickly pampa shrubbery to climb a rocky bluff from where the pampa stretches endlessly in all directions.


Ready to leave the following day, I hear the shouts of the gauchos in the distance and run outside. Here comes what I’ve been waiting for – a moving wooly mass flows over a low rise, heading for its home pasture. 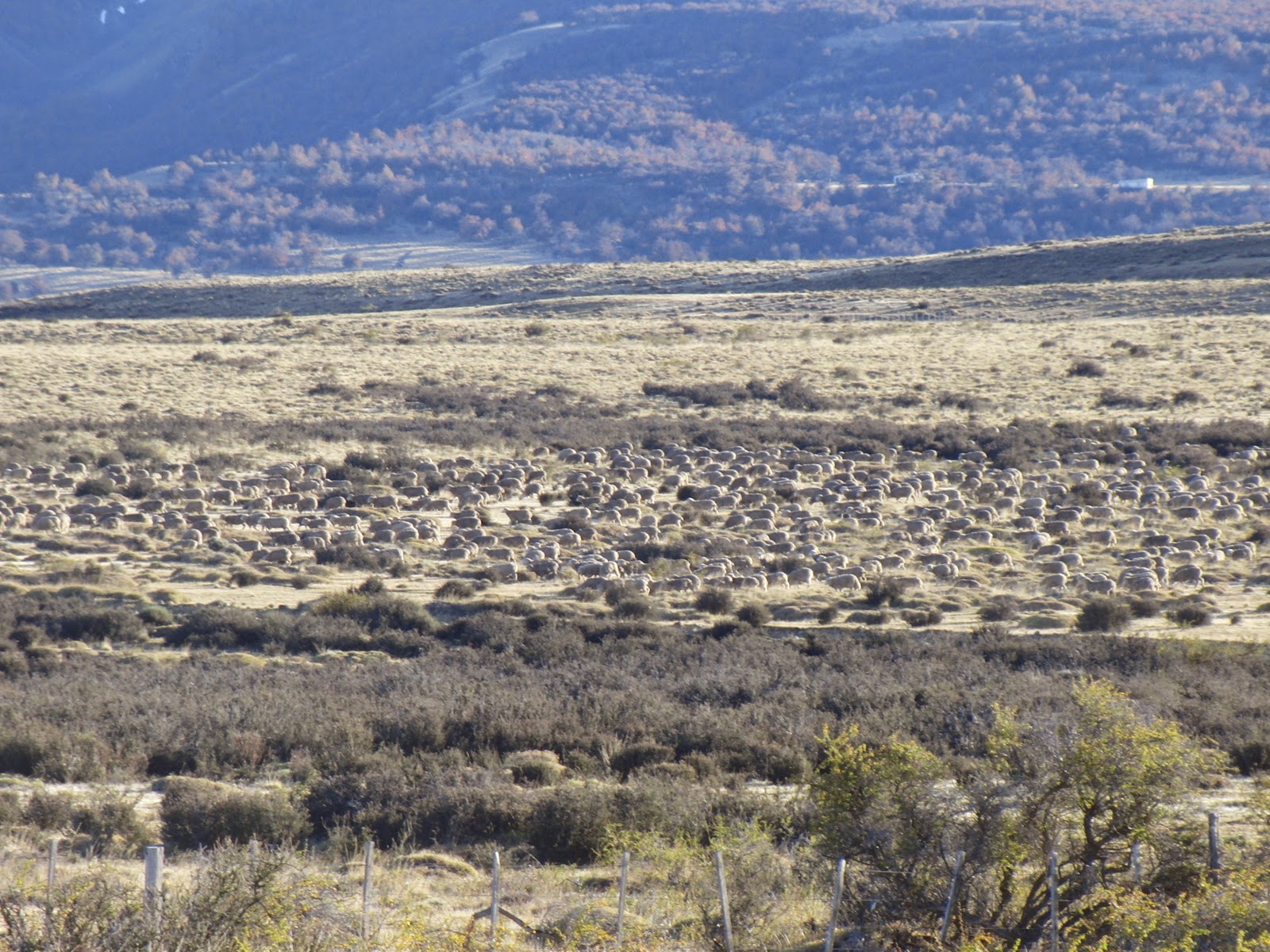 Posted by Tarweedspirit at 6:12 PM No comments:

A native Californian, graduate of UC Berkeley, former Peace Corps volunteer, I moved to Santiago,Chile in 1972 to marry my Chilean boyfriend. Two sons and four grandchildren later, I'm a retired teacher and now spend my hours writing, tree hugging, bird watching, talking to stray dogs, fighting an endless battle with garden weeds and noticing little things in life and the Earth that fill me with wonder.